It was in February 2020 that the COVID-19 pandemic took over the world. The World Health Organisation (WHO) was quick to declare it a pandemic. One of the most contagious viruses in the history of mankind, the coronavirus spread like wildfire. The magnitude of devastation caused by the pandemic was unlike anything the world had seen. Since the world knew very little about this new enemy, experts suggested that the best way to weather the storm was to limit the physical interaction between humans. Handshakes, hugs, and other ways of greetings involving physical contact became big no-no’s.

This new reality turned the world upside down. The world had been used to humans coming together and getting jobs done. But this new normal posed new questions to people everywhere. If humans can’t meet, how are they supposed to perform the functions that need them to collaborate with other humans? How would businesses, whether big, medium or small work? What would be the future of jobs? While there were no definitive answers to these questions, there was one thing that had some of the answers: the Internet.

The Internet has been around for about a quarter a century now but the new realities of the world further brought it to the center of attention of people all around the world. There is no doubt about the fact that humans have suffered on a huge scale due to the pandemic but it is safe to say that the devastation would have been greater than this had it not been for the Internet. Overnight, the world had to adapt to the new normal and start to perform most of the functions online. Some even believe that the pandemic has changed the way the world works permanently and that working online is the future of every sector including services, education, corporate, governance, and even health care in some cases.

Also Read :   What Internet is Available at my Address?

Since governments, in the face of this emergency, were forced to direct most of their resources to healthcare, it was impossible for them to invest as much in other sectors. This certainly meant a loss of jobs at an unprecedented scale. But this crisis was mitigated to a great extent by the Internet. While a lot of jobs involving the physical presence of humans took a hit, others that only involved pens, papers, and sharing of ideas were saved by the Internet. Work from home, zoom meetings, exchange of important documents through email and WhatsApp provided an alternative to people actually going to offices and working sitting close to each other. In such a situation, internet companies like AT&T offered economical AT&T internet plans to millions of people as they knew that people are on a low budget and internet is now a necessity and they still offer high-speed internet at an economic rate to their customers.

The education sector was probably the biggest beneficiary of the Internet during pandemic times. Schools, colleges, and universities are some of the most crowded places and can serve as covid hotspots. Online classes enabled students to continue their learning without risking their lives. The use of the Internet also introduced a huge number of students to new avenues of learning by diversifying the process. In addition to this, online learning has helped students, their parents, institutions, and states to cut the costs they incur for conventional learning.

There is no denying the fact that the pandemic has cost businesses, especially small and medium businesses, the most. But imagine what things would have been like had it not been for the internet. The last year saw an unprecedented increase in online shopping. This means that millions and millions of businesses not only survived during the pandemic but countless jobs associated with those businesses were also saved. This has also introduced businessmen to new ways of doing business. Online shopping, or simply the internet, helps decrease the capital required for doing business and gives new businessmen and women access to greater markets with less money spent. This is the very reason for the recent surge in the number of entrepreneurs entering markets of all kinds.

Also Read :   Services That Should Be a Priority to Set up after Moving

The human catastrophe that is the COVID-19 pandemic is undoubtedly one of the greatest in human history and there can be no alternative for the loss of lives that it caused. But we need to be thankful for the fact that the world has the internet. Had it not been for the internet, we would have still been groping in the dark and trying to find the solutions to some of the most pressing challenges the world faces today. 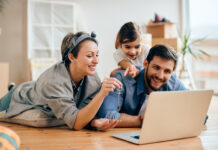 Services That Should Be a Priority to Set up after Moving

What Internet is Available at my Address?

How to Get Faster Internet While Working From Home

8 Tools That Will Improve Your Manufacturing Biz

People-Based Marketing Strategy of Gojek: How it Makes a Difference

For Hair Loss and Re-Growth, There Are Six Ayurvedic Remedies

Fun and Easy Ways to Boost Your Child’s Brain Power